skip to main | skip to sidebar

Ally's Uncle Preston, graduated pre-school! yea! He had it at Wheeler farm. The kids had a good time running around and seeing the animals. (Preston is "thing 1 in red-he was suppose to be in yellow..lol) 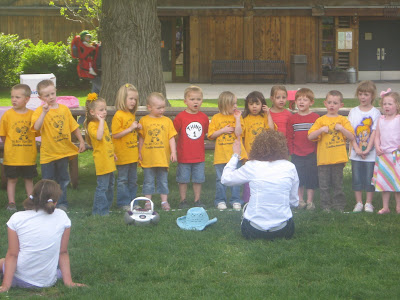 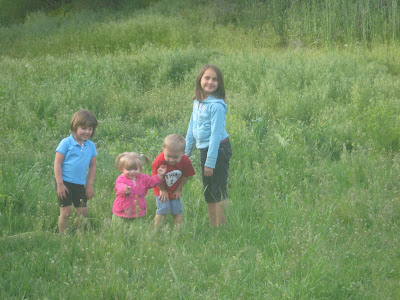 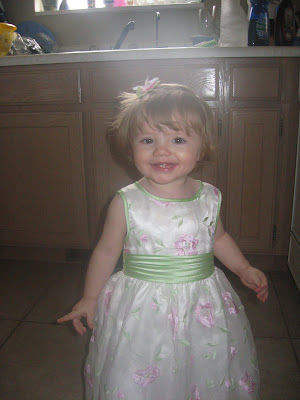 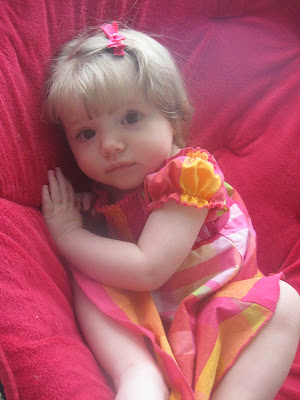 My bday weekend was a blast! It was also Easter Weekend. So I had a party combining the two. I had people over, we played Guitar Hero World tour (like Rockband but BETTER), and people could dye Easter eggs... 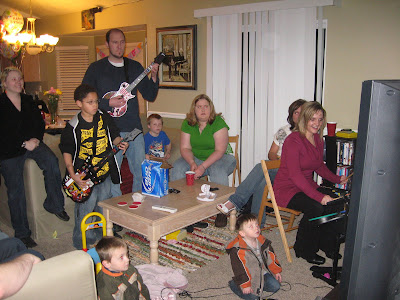 I had also won Britney Spears tickets from 107.9!! 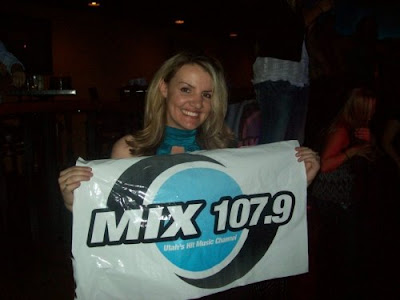 Saturday, Samantha and Ally went on an Easter egg hunt... 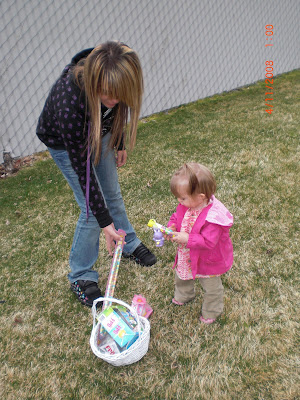 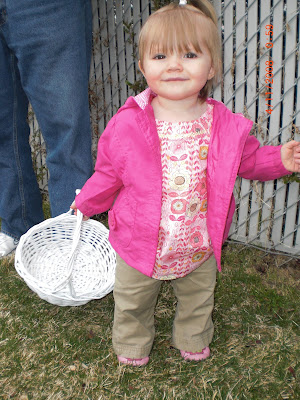 Here is Samantha and Ally Easter morning before church.. 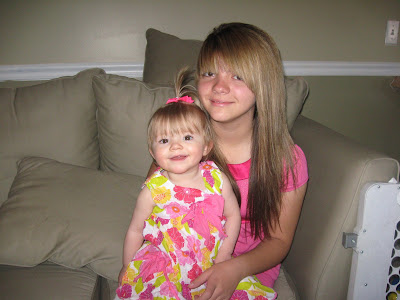 then on Monday me and Samantha went to the Fall Out Boy Concert (pictures are on her camera I'll post later) and Tuesday was the Britney Spears concert!
Here I am with my tickets! 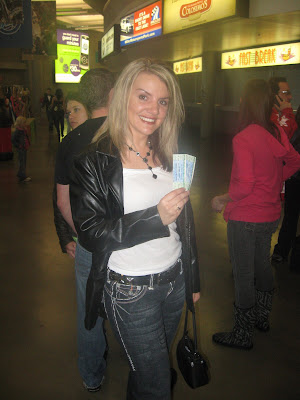 I also got to meet the PussyCat Dolls that were opening for Britney Spears. (they wouldn't allow pictures) :( 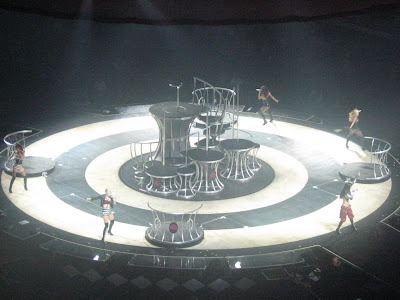 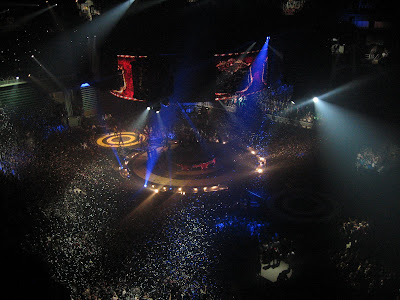 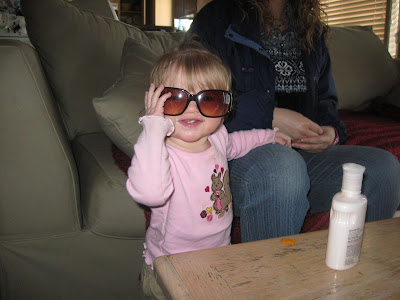 Ally turned 15 months old is still only has 3 teeth....1 on the top..2 on the bottom... I need her to have teeth so we have more food options!!! If you click on the pic to zoom in, you can see what i mean about the tooth situation ;)
Posted by April at 8:43 PM No comments:

K i'm going to cheat again and post this as IF i was posting clear back in March....

Ally got her first "big girl" car seat. Here she is her first day riding in it: 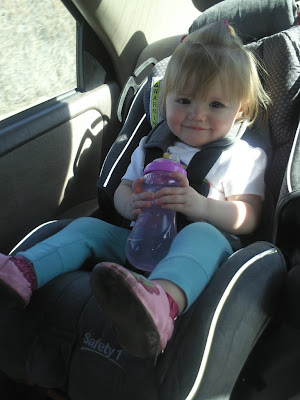 ON St Patricks day, Ally got her first non-mommy haircut. Here she is sitting in the seat with a sucker to hopefully keep her occupied while getting the hair cut. (her first time eating a sucker, and nope, she did not like it. She threw it to the ground-who's kid is this anyway??? NOT like candy???) 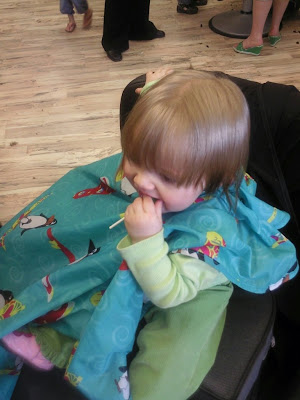 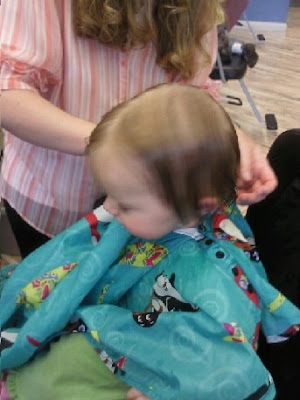 And here she is...not very happy about having a wet head..and it was difficult for the lady to cut her hair cuz she DID NOT want to hold still....oh well! We tried! 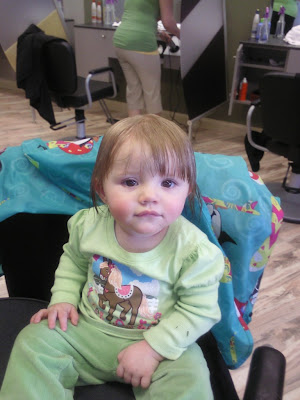 This takes place after everyone left Ally's bday party (and all the toys were still all out)... Ally is so much fun and so cute! She is our entertainment every night!

Photo and video editing at www.OneTrueMedia.com
Posted by April at 4:44 PM No comments:

This video starts out AFTER we sung Happy Birthday and her staring at the cake for like over a minute wondering what she was suppose to do. She touched it a couple of times..but that was about it...so I tried to help her out.......

Okay so my vision is BETTER...but still not 100%. And after me being sick, Ally being EXTREMELY sick while I was pretty much blind, Samantha getting sick, and now me being sick again..I hope my month of hell is finally over...

So Wed, I had LASIK eye surgery. I was hoping to say bye bye to glasses FOREVER. Well, after my surgery, as I was hearing other patients rave about how much more they could see just minutes after getting it done..i was sitting there wondering why my vision was even worse. Everything was a white fog with blurry everything else from what I could see. The "fog" is normal and it "should go away by morning". They told me the best thing to do was go home and take a nap for a couple of hours. So I did. I woke up, still white and foggy and blurry and now the numbing drops had worn off and my eyes were killing me. I stayed awake for about an hour, couldn't see anything or even attempt to watch tv (it was just a fog of blur) and threw in the towel and went back to bed. (In the mean time I had to put 3 different kinds of drops in my eyes). Thank goodness for Samantha to help take care of Ally.

So the next morning I wake up...fog gone...blurry vision even worse. AND I was in excruciating eye pain. You know how it feels when you have an eyelash caught in your eye? Well it felt like I had an entire eyeball full of eyelashes in both eyes with little rusty knives scratching my eyes everytime I moved an eyeball or an eye lid. I could barely open my eyes and it hurt like hell when I tried. I went in for my 1-day post op appt, and describe to her my misery (I'm still wearing the ugly sunglasses they sent me home with the day before). The nurse writes down all my symptoms and asks me to try and open my eyes to look at an eye chart. (It wasn't a paper eye chart...she turned the lights off and had a projection on the wall of various letters).

They were all blurry. She tried another slide...I could tell all the blobs were bigger, but yet they were still blurry. So finally she just put one gigantic letter on there and I said, "I think that's an 'E'".... So basically I WAS suppose to see this:

But instead..I was seeing this:

So the doctor comes in and I tell her how miserable I am and how this should be the new torture for getting prisoners to talk...so she puts numbing eye drops in my eyes and asks if its any better. OH YES! Relief at last!! I asked her if I could take a gallon of that home with me but unfortunately it prevents the eyes from healing so that was a no.

Then she puts dye in my eyes and takes a look.
Well, I guess my cornea's were not re-attaching the way they were suppose to and I had "corneal abrasions" in both eyes and my vision was 20/150. (almost legally blind). I started to sob because I had already had one annoyingly bad thing after the next go wrong every single day this week (in fact my sister joked that maybe I shouldn't be doing the surgery with all my bad luck). The doc put contacts in my eyes to prevent my eye lids from creating worse abrasions and to hopefully let my corneas heal. So I have an appointment today and then again on monday. I can't drive or go to work. I'm depending on my family to drive me where I need to go. The good news is, I'm not as blind today as I was yesterday (hence me being able to do this post) and i'm not in pain anymore. My vision is still blurry but not as bad and its hard to focus... My vision is more like this now:

Here's hoping that it eventually it improves to the first chart.

Make an on-line slide show at www.OneTrueMedia.com
Posted by April at 10:00 PM 3 comments:

Hi, I mainly created this blog due to the persuasion of a fellow blogger who is amazing at it! (this means you Erin) :) And it is also a good way for family and friends to be updated. Thanks for visiting!

April
Hmmm, what can I say? I have 2 darling girls who bring the greatest joy. I love music, and love to travel. I'm one of those people you can call up to do _____(fill in the blank), and I'm usually down, and I'll try anything once! (I've even been skydiving). I play a few instruments and here comes the boring part of my life: I work for the post office. But hey, it pays the bills :) 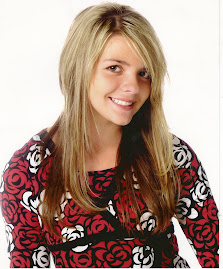 She loves Art and to snowboard and is in the 8th grade. She is becoming the typical teenager and isn't the biggest fan of school...but she does pretty well and I am very proud of her! 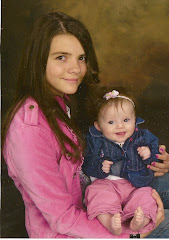 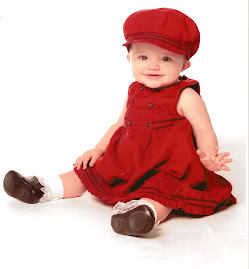 Ally is 10 months old and is STILL getting cuter by the day!! Her newest tricks: crawling, pulling herself up and walking along furniture, headbanging to music or doing little half-squats when she is standing up to music, clapping, clicking her tongue, and getting into EVERYTHING. She is such a good baby, I have been blessed with yet another angel!!